Has it really been 6 years? Whoa.

I'm back in full retirement mode and looking for things to do. I stumbled across my Atari Lynx, with all of the wires coming out of it and the MicroChip dev board glommed to it. So I'm cleaning it up and counting all of the broken wires and reading all of my past documentation.

The goal is a card that will plug in like a game cartridge, have an SD card on it so multiple images can be stored AND management of the images will be through a PC, and selection of the boot image will be via a [dip switch?] or something. Maybe a software shell that will allow you to select the image to boot. Who knows ...

Right now - this is a mess. And I've forgotten a lot about how the cartridges work and how the Lynx system handles images. I'll have to re-learn that all over again.

I just ran into an interesting issue with my desktop computer:

I have a 7-port USB 3.0 hub attached. It has been part of my system for a short while and have had no issues until recently.

I usually just plug in USB 3.0 thumb drives into the hub, so I haven't had a need to use the +5V/2A adaptor that comes with the hub. But recently, I have been plugging in a portable USB-powered hard disk into it and I decided I had better use the adaptor to make sure all current requirements are met.


Well, I started having some weird keyboard issues this morning, and I decided to shutdown (turn off) my system for a short bit and then reboot. But when the system shutdown, the drive LED was still lit!

I didn't want to do a hard shutdown, for fear that something being written to the hard disk would get corrupted (although, I didn't hear any typical hard disk noises).

Then I happened to look at the USB hub with the power plug going into it. I removed the plug and ... the drive LED went out! It turns out that the USB Hub was feeding the external +5V from the adaptor back into the motherboard! YIKES!

So - I opened the hub and identified the trace that was bringing +5V from motherboard via the main USB plug of the hub and ... just cut it.

I could install a 1N4007 diode as a blocker between the +5V from the hub and the +5V from the desktop, so it won't feed back into the motherboard, but ... I worry about the 0.7V drop across the diode. Would the voltage inside the hub be only +4.3V when connected with the AC adaptor? Maybe.

I need to do a few experiments to confirm that but not today. I have work to do and everything is working well enough. For now.
Posted by Timothy S. Carlson at 9:19 AM No comments:

My favorite remote for development / debugging. An old Fisher RVR-4910 with a Shuttle Knob. For some reason I felt compelled to document it. 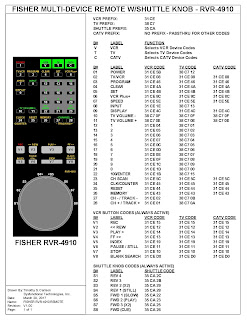 Aside from the Arduino post I just published - has it really been almost 2 years since I've written anything for the blog? Oy, vey. Too busy for my own good, I guess.

Still building Filipino Christmas parols. Lots and lots of them. Playing with WS2812B IA RGB LEDs, too, but I'm having a hard time figuring out the right way to mount them in the parols so that they look best and are somewhat equivalent in brightness to standard 1 color LEDs.

It may be another 2 years before I publish anything else. Don't be surprised.
Posted by Timothy S. Carlson at 8:11 AM No comments:

Dipping A Toe Into The Arduino Pond


I bought an Arduino board, training shield, and ethernet shield this weekend at the SM Megamall. Never too old to learn new things. So far, not really impressed - I'm still convinced that the right MicroChip PIC, chosen for the job at hand, is far superior (and cost effective). I'm still wading through the Arduino, however, so it still has the opportunity to win me over.

BTW: what is it with 'sketch' and 'sketches'? WTH? Wasn't 'programs' and/or 'source code' and/or 'projects' good enough for Italians? Too cute for it's own good.


Also BTW: not digging the 'C'-like language. Give me assembly any day. You can write faster, leaner, more efficient code in assembly. At least all of the code is open source, so you can dig into it and know what all it is doing.

Also also BTW: I _am_ digging the shield concept. Nice for initial prototyping. I will have to come up with my own 'proto-board' shield, tho. They didn't have one at the store I visited at SM Megamall.

Posted by Timothy S. Carlson at 8:06 AM No comments: