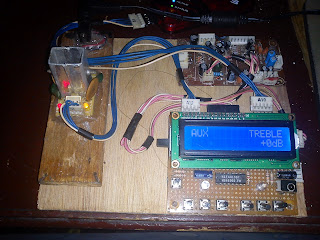 I've been working on this for a while. It is a PIC12F1840-based Amplifier Interface. The engine is a PIC12F1840 - an 8-pin device with lots of cool features. It interfaces to an HEF4015 for the buttons, has an IR receiver input, and communicates to the LCD screen and audio processor through an I2C interface.

I was trying to integrate a radio module, but the module I had developed a short to ground on the SCLK line.

I have an (ugly) case for it to go in - it has one stereo output and 3.5 inputs (MP3, VID, AUX, and a stereo plug in the front that switches into the AUX input - for plugging in your MP3 player).

Almost there. Just cleaning up a few bugs.
Posted by Timothy S. Carlson at 1:11 AM