Since PONG was such a snap (heh) - why not do BREAK OUT for the PIC12F1840? Same hardware as the PONG game (you will have to turn the paddle sideways for left to right, instead of up to down). A lot of the infrastructure for the PONG game remains - just change the position / orientation of the paddle, change the graphics, and change the game play. Yeah, that's _all_ that needs to be done. Sure.

I've just started this today - I have the title screen changed and the paddle orientation complete. Working on the game play now. Nothing worth releasing the software yet. If you want to see what is basically in the guts of this game, go take a look at the PONG post HERE and check out the source code links. 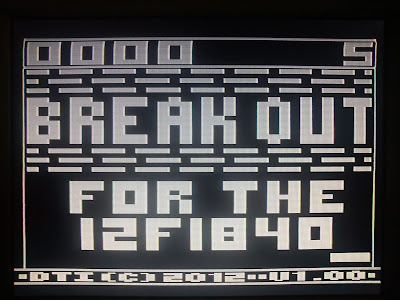 UPDATE 12.1226:
The title screen, field, paddle and ball are done. Scoring and life counting is done. Wall collision and paddle collision detects are implemented. Loss of a life if you miss the ball is implemented. Video timings are (mostly) at spec. All I need to do now is put in the bricks!

UPDATE 12.1226:
I'm going to take the opportunity to try a new timing scheme I have been thinking about. Instead of timing the video lines throughout the code, I am going to let a TIMER0 interrupt service routine generate the video signals (except for actual data). This should be interesting.

UPDATE 12.1226:
It's possible to use the timer0 interrupt to time the video signals -  for the most part I am getting a clean signal with no jitters - but some of the tweaking is AWFUL. I think what I actually have is a hybrid between using the ISR and the manual timing. More work to be done!

UPDATE 12.1227:
Using the timer0 interrupt has been fully implemented. Everything is working as before, but now all of the nasty 'Timing Fudge' (usually a bunch of NOPs) has been removed from the code. I can change the graphics now without having to go through and tweak each of the individual lines. This is _really_ nice. And the screen is rock solid. 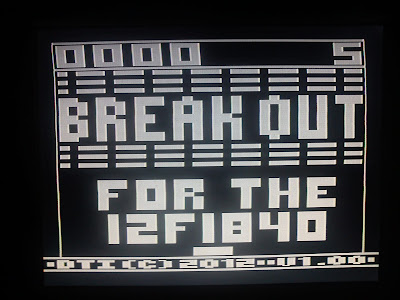