UPDATE 12.1119:
I strong-armed the frame into a 'music mode'. Video below the fold (at the bottom of this post).
-----
Here's a project that I have just started working on - a picture frame with 17 LEDs around the edge. 16 LEDs are controllable in pairs, 1 LED is a power indicator. There is also a push button at the bottom edge of the frame to change the light patterns that are displayed.

It's just another derivative of the Dual Die project. But the implementation is what is cool. I may try to figure out how to turn on the frame / select patterns using noise detection - a clap or whistle - but that involves microphones and op amps. I don't have enough of either of those.

I need to finish the prototype (pictured below) and get the code settled quickly. I need to make 8 of these (yes, EIGHT) for Christmas presents for the girls in the family.

In the prototype, I drilled through the entire frame to install the LEDs - that was before I realized the white part of the frame is actually an insert. So - the next frames will have LEDs installed UNDER the inserts, so you won't see them until they light up. The only hole in the insert will be in the bottom one, for the push button switch.

I'm hoping to power these from either a +9V battery (I have lots of +9V battery clips) or a 4 'AA' battery pack, but I don't have any 4 cell holders and I don't know where to get them.

More as I progress... 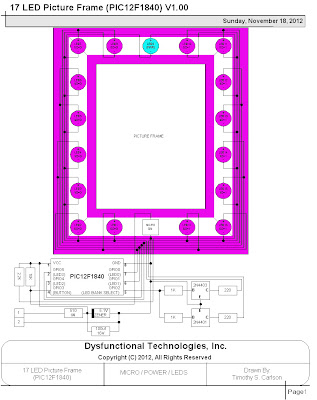 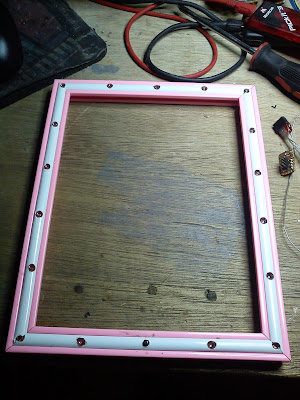 Video below the fold...