My Version Of 'Meteor' Lights

UPDATE 12.1221:
Major update! You _can_ control 20 LEDs with an 8-pin PIC. See the new post HERE.
Update 12.1115:
Just in case anyone is interested, I have drawn up the schematic of the Chinese Meteor Lights I bought at a local store. I don't know what kind / brand of lights you are getting in the States (or elsewhere), but if it has a UCS1212 IC as part of the design, then it is probably very similar to this.


And if you are interested, here is the PDF for the datasheet. Be forewarned - it's in Chinese.

Did I mention in each of the big tube lights was a transformerless 220VAC-13VDC power supply? WOW.

Here's some pictures I took of the business end of one tube: 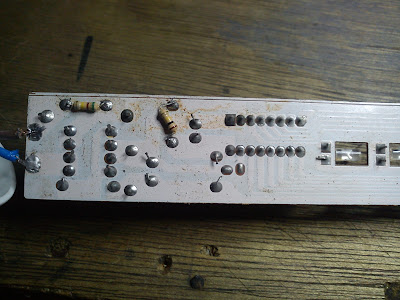 To drive 48 LEDs with the 16 pin part - actually only 14 pins, as two pins are used for power and ground - they must be doing some sort of crazy-ass charlie-plexing and fast strobing of the LEDs. You can barely see the traces (slightly darker under that white mask) shooting to the right to the string of 48 LEDs. FOURTY-EIGHT LEDS. Wow. Let's see - 12 pins as drives to the LEDs. That makes 4 groups of 12 LEDs. Use the last two pins as multiplexors. Yeah, it's doable. Consider, also, that the IC may be doing it's own voltage regulating, and it has to generate it's own internal clock. Must be nice to see a need, think up an IC, get it designed and built, and then have 100 MILLION of the damn things for sale. 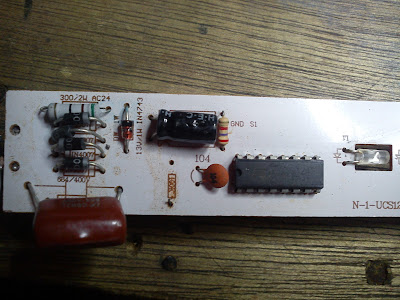 The AC is coming in through the blue/brown wires to the left. The single IC is the UCS1212, a dedicated 'Meteor Light' piece of silicon. The 4 diodes to the left form the bridge rectifier. A 13V 1W zener diode brings down the rectified power to something usable for the IC. The 48 LEDs (one shown) continue to the right. Yup - I can't compete with this. I keep saying that so that it will finally sink in. I was SO looking forward to building these damn things.

I just realized - the plastic tube is also custom. It has a grove on either side that holds the PCB in place. NOPE - too much for me. I give up.
Consider this project CLOSED.

Oh, btw: I did manage to get fading to work from the interrupt service routine. It works really nice - so I'll be able to use that chunk of code for other projects. Not a complete loss, then.
-----

I'm trying to recreate the 'meteor' lights I am seeing for sale in the Manila area. Most have 10-12 plastic tubes, with 8-16 LEDs each, which simulate icicles handing from the roof edge. Most do a single pattern - a top to bottom LED cycle, with the topmost LEDs slowly fading out.

I'm using Charlie-Plexing to drive the 8 LEDs with only 5 pins from the PIC. No resistors or transistors are in the design. My pattern does the top to bottom LED cycle, then all LEDs on, then repeat. I have not programmed in the slow fade of the LEDs yet.

Hopefully I can produce a full string of LED tubes (12 tubes / 8 LEDs each) for 1/3 the cost of the lights that are currently for sale in the stores - my cost including parts, labor PLUS a nice profit. I want to have a full prototype ready within a week - maybe units for sale by the end of the month. If there is interest, then next year we will be ready for the Christmas Holidays selling cycle - which means building up inventory all next summer.


All LEDs lit on the workbench. 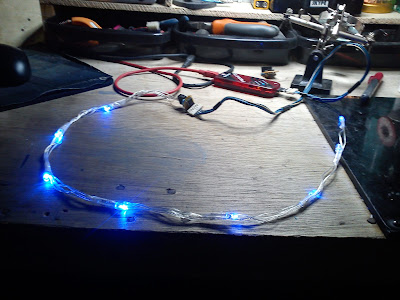 Short video. Horrible quality, but you get the idea.
Yes, that's drunken Karaoke you hear in the background.
At least 2 times a week there is some kind of party in the
neighborhood, and drunken LOUD Karaoke is usually a
big part of the celebrations. I just turn my music in the lab
up _really_ loud to counteract it.