UPDATE: 12.1113: It's actually an 8-Button IR Remote. I didn't populate the eighth button because it wasn't needed it for the amplifier controller design. I'll update the schematic / pictures for the eighth button.

UPDATE: 12.1114: Added second sheet of schematics, updated to V1.01, removed 7-button 4015 pics.
-----
I've been working on this 8-Button IR Remote Control for a while, but I never got around to documenting it. So - I've drawn up one sheet of the schematics and decided to post it. When I finish the second sheet (with all of the buttons and the HEF4015 interface), I will also post that.

This came about because I was working on decoding IR commands using a PIC. I have a PIC-controlled amplifier interface I am working on and I wanted to incorporate IR remote commands for changing the volume, selecting the input, etc. etc. That led to my wanting to creating a specialized IR remote control for that amplifier project, which led to this.

It works rather well, except that I only have a range of 4-5 feet. I've tried all sorts of configurations of the IR LED circuit and 4-5 feet is the max range I have been able to achieve. Does anyone out there have any ideas on what I can do to improve the range?

The really cute thing is that there is an bit-banged I2C interface that can drive a 2x16 LCD display module. That was helpful when I was trying to debug some issues, but mostly just a neat hack that really isn't that useful. And - too expensive for a cheap remote. 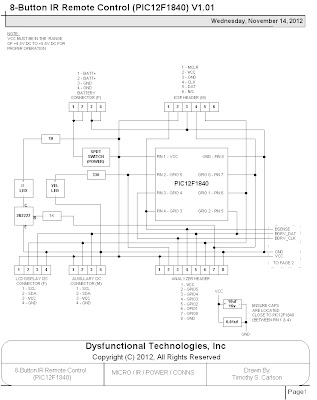 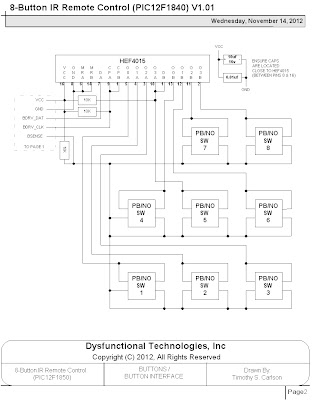 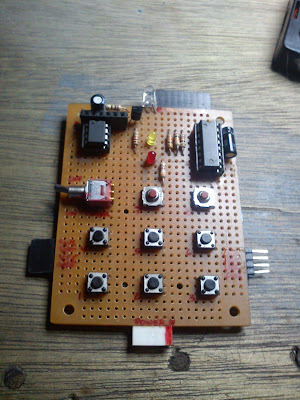 The component side of the 8-Button IR Remote Control
that has the HEF4015 interface to the buttons. 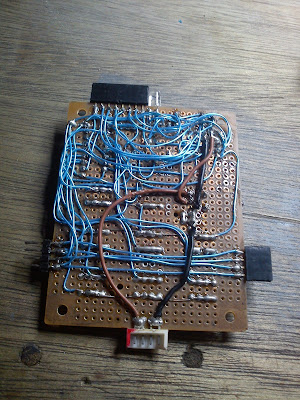 The back (ugly) side of the 8-Button IR Remote Control
that has an HEF4015 interface to the buttons. 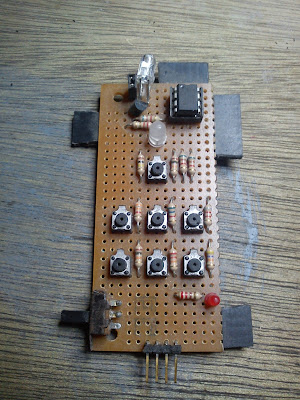 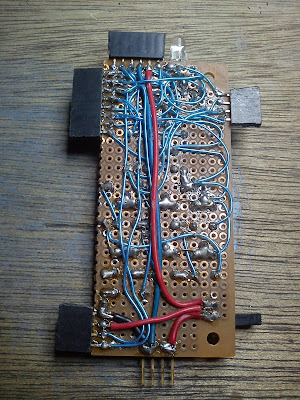 The back (ugly) side of the 7-Button IR Remote Control
that has a resistor ladder interface to the buttons. 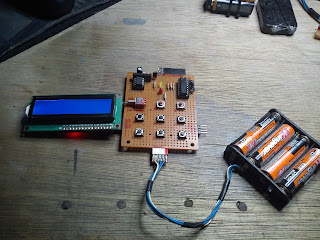 The 8-Button IR Remote Control with the HEF4015 interface
to the buttons, connected to a battery pack and an 2x16 LCD
display with an I2C interface. Yes, even without the LCD display,
the whole package needs to be much, much smaller.
Posted by Timothy S. Carlson at 11:47 PM